Trixie (Noel Aungier) follows a magician of the same name about her day as she solves the many problems she encounters with the wave of her wand. The short’s lack of dialogue gives its lead, Caoimhe Mulcahy, the challenging task of showing Trixie’s personality through her actions; a challenge she more than meets, as she injects her performance with quirky adrenaline that bounces throughout the short.

The magic of the short comes from Aungier’s work behind the camera; utilising changing perspective and small amounts of special effects to fully demonstrate Trixie’s magical prowess (her simple slope change and her framed head exemplifying the range of methods used). The short’s music and sound design do a lot in helping to set the tone, with a jovial tune playing as the backdrop to a plethora of comical falls and foibles. Trixie’s actual interaction with the soundtrack during her final performance was particularly entertaining (with a special thanks to its ensuing sombrero-summoning results).

Trixie packs its 4-minute lifespan with comedy and heart, as Trixie’s interactions with the colourful characters she encounters around Dublin leave the audience laughing. The city itself is used to great effect, as Trixie’s wander through Dublin allows for a few landmarks and some scenic views to be utilised for some additional humour. Her encounters with the drunk are a particular highlight, with her summoning him a suit getting one of the biggest laughs at the screening. Aungier’s work here shows a director using the camera any way he can to create a story of wonder and laughter, even if it is brief. His film is something of a director’s playground, as it seems as though he had as fun making it as it is to watch. 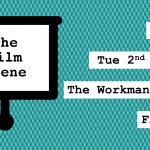