Fin Divilly: Resident Troubadour (Luke Brabazon) is a dynamic window into the world of the musician, guiding the viewer through a typical week in his life. “Angular” and “ignorantly optimistic”, Divilly’s magnetic personality shines through the screen: from his struggles with his own mental health to the near-tragic story of Bobby Sands the hamster, we discover what makes the musician tick.

The documentary seems to flow effortlessly, with smooth editing and innovative shots making it an absorbing and entertaining watch. One particularly picturesque moment shows Divilly performing a song on a rooftop overlooking the city. As Brabazon discusses in the director’s Q&A, the location wasn’t hard to find- they simply stuck a sign in a neighbour’s window asking if their roof was up for grabs. This creativity and adaptability evident in Brabazon’s directing style results in a beautifully candid portrayal of Divilly’s world, stressing the difficulties as well as the positives of being a musician in Dublin.

The documentary does not shy away from the depiction of sensitive issues, and Divilly talks openly about feeling “overwhelmed by existence”. In a black and white scene, the word ‘anxiety’ floats cloud like above him as an unknown pair of hands smothers him with a pillow. However, Brabazon takes pains to emphasise the idea that music is a place of escape and refuge for Divilly, as he appears most at home in the moments when he is performing in a pub or playing with friends at home.

This expertly-made documentary ends with a performance from Divilly as he sails down the Liffey at sunset- a beautifully scenic end to a feel-good film. Brabazon’s honest filmmaking and Divilly’s infectious personality are truly a dream combination, and we at the Film Scene would like to formally request a sequel/ miniseries/ 12 part documentary… 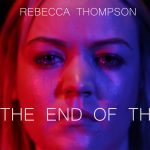 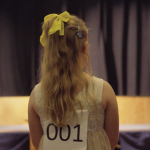